Lean in Human Resources with data management and its impacts

Lean in Human Resources with data management and its impacts

In this blog article, I will explain how data management in Human Resources (HR) is crucial if you want to put in place an efficient HR policies, to hire people, to understand why your employees are leaving… Collecting data is your FIRST ACTION to understand your current situation, to be aware of your problems, to solve them, to reach Excellence and reduce your costs.

To write this content, my personal experience as Continuous Improvement Expert for one automotive industry in Poland will be used.

When I started to work for the HR department, I was faced with real disorganization in term of data management. After a small observation in their office and questions to the team’s members (Kaizen principles), several issues appeared:

With this context, the HR manager asked for my collaboration to help her team with data management and improve her department. I used my knowledges of Lean and data management to perform several actions:

To achieve that, my source was the existing data and some of them were compiled with a database in Access that I designed. As support for analysis, I built Excel templates with macros (VBA) to speed-up the process and to reliable results.

Few days after my arrival, one of the employees explained to me that she had an issue to control lockers. Regarding the business’ standard, each employee in production, when he/she arrives, he/she has 2 chests (one in the kitchen and one in the dressing room). Furthermore, we didn’t know exactly how many lockers were available for new workers. As well, her manager requested a visual template to check the current status for closets.

To accomplish that, I did a 5S. With the HR specialist (the owner of the process), our first action was to perform a deep inventory of lockers in the canteen and in the dressing rooms (man and woman). When we were counting them, we tried to found the lockers’ owner. On the same time, we were drawing the layout about lockers’ disposal within rooms. This draft was used to create visual cards to guide people in the building.

When this picture was taken, we set in order our data collected (one excel sheet per room). Moreover, we checked that each locker was owned by people from production. For each mistake revealed, we investigated before taking some actions. Then, we shined the Excel file (by creating a standard) before incorporating data within the database. For each locker, a clear code was created:

When data were integrated, I used them to shape the automatized report requested by the HR manager. For this dashboard, each cells had the locker’s number, the matricula and the employee’s name. Moreover, visual tips were used to facilitate the reading:

With this automatized template, standardized for each room, it was easy to process it, to investigate lockers owned by external workers, to be aware of free closets and to take decisions for buying new ones.

With the database that I constituted, I dealt with some key elements to draft the HR policy with the department’s manager. Those inputs are: the date of birth, the date of employment, the sex, the category (direct, indirect, administrative) and the job. From them, two dispatches were founded: the age structure and the density analysis.

The pyramid or age structure is very useful to determine your human risk. It is the combination of two records: age of people and sex. 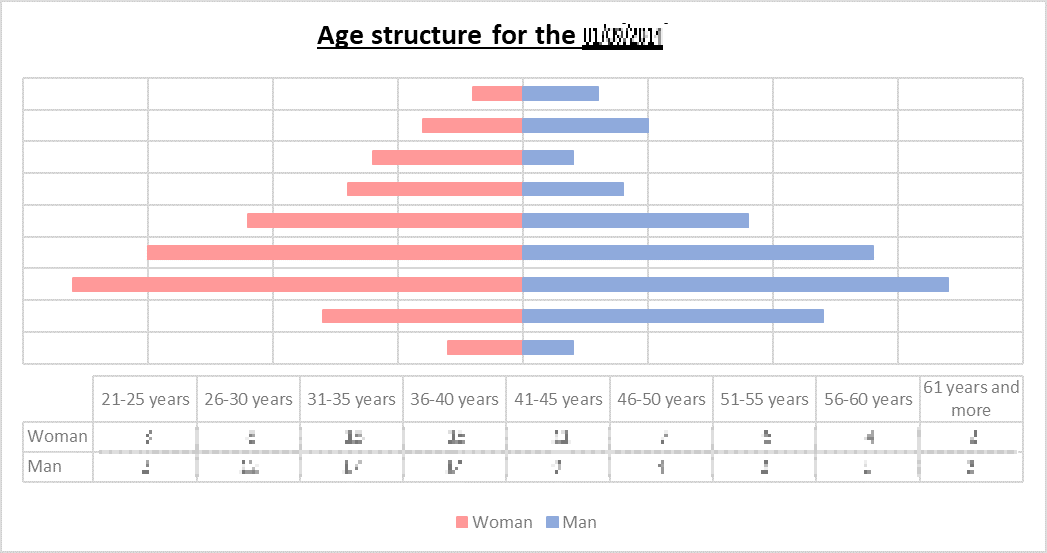 With this analysis, you can observe if:

But this report is not enough to establish your recruitment policy, you need to release the density analysis.

This analysis is the combination of two data: age of people and the anciency within the company. But several criteria (the department, the job’s category, …) has to be taken in consideration if you want deepest analysis and affine your policy. 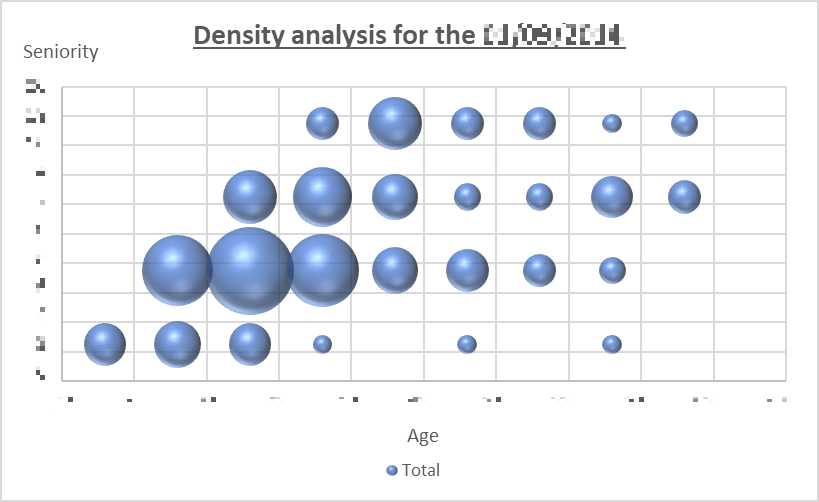 With this dashboard, for example, you can see if:

With this report, you start to have a clear picture about your social situation and your potential risks that your company might be facing off.

After those two statements obtained and to adjust the HR policy, several questions came to my mind: “Why people are leaving the company? Do we have some recurrent reasons for each department? Which nationalities are impacted?”. This reflection pushed me to investigate about all departures within the business.

In fact, investigating resignations might highlight some issues in term of:

All data are crucial to detect some hidden problems / illegal issues and adapt your HR policy. If no actions are taken, it might have negative impacts within your business and generate huge costs.

Another studies, which might be crucial for your HR policy, are your headcounts structure and your temporary workers reports. These other Key Performance Indicators (KPIs) have to be known to limit the human risk:

All records can be crossed to go to details, to investigate on your current situation and to know which departments / positions generate issues and increase your costs.

In Human Resources and in every department, your FIRST ACTION is to collect and analyze your data to find your opportunities for improvements. After a brainstorming where you PLAN your actions, you have to DO immediate measures to protect your employees and business. You have to CHECK them before implementing LONG-TERM ACTIONS with an adequate policy to reach excellence and reduce your costs.

To conclude, hiring costs are expensive and if you do not care about your people, those costs might generate huge losses within your business. This is why, taking care of your people, analyzing your data about what is going on and to be aware of your Human Resources issues, might help you to prevent risks for your business, to have better HR policy and improve your image to the public.

Have you already observe that, by using the Lean methodology, you will have better HR policies and reach Excellence? Please, feel free to contact our consultant or to give your feedback below. 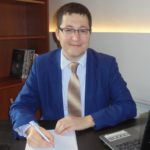 By continuing to use the site, you agree to the use of cookies. More

The cookie settings on this site are set to "accept cookies" to provide you with the best possible browsing experience. If you continue to use this site without changing your cookie settings or click on "Accept" below, you consent to this.